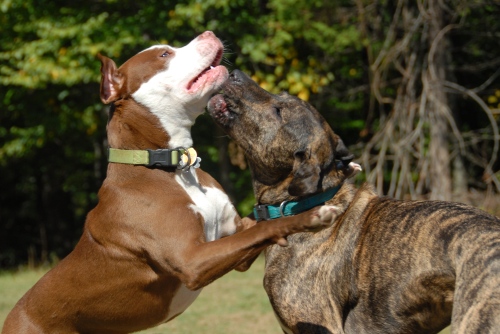 With the Jets playing the Patriots at 4:00 and the Giants playing the Colts at 8:00, it afforded many people the opportunity to enjoy the beautiful Sunday afternoon sunshine with the dogs at the dog park.  After finishing her second week of beginners agility training on Sunday morning, Rags grabbed her brother Scraps and the bicycles and we all headed over to the dog park.

To view a slideshow of the photos in Picasa Web albums go to the link below:
http://picasaweb.google.com/lgindoff/20100919CentralDogPark?feat=directlink

When we got there we discovered many dogs in the small dog park including tiny little  RoxyChi who we met yesterday, Phoebe, Lewis and Clark and other came and went.  This may have been the most crowded day we have had at the new dog park.  At one point I tried to count and I estimate 40 dogs were in the large dog park with probably 10 more in the small.  It was a great day and all the dogs seem to play well together.

After spending a while in the small dog park we entered the big one and did a lap.  There we met Trace, a wiry-haired Jack Russell.  There was the Carin Terrier named Guinness.  Many new dogs to add to the blog.  We then sat down with the big dogs in the shade and enjoyed their play.  We saw this other white haired Jack Russell named Luna with a grey patch over her left eye.  There was also Oliver the Bassett Hound.  Wow, there were a lot of dogs and it was just so comfortable, everyone was just relaxing on the lawn while their dogs played.  We spent 2 to 2 and a half hours at the park without batting an eye.  We eventually ended up in the small dog park to close the day and the weekend.  We are still enjoying this great dog park as its popularity keeps growing.  It really has been a great gift to us.